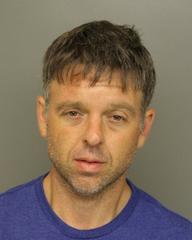 On the evening of June 7, 2017, the Moore County Sheriff’s Office received a call from the Dollar General, located at 4205 N.C. Hwy 211, West End, NC 27376 in reference to a person possibly hiding inside the store.

Sheriff’s deputies responded to the Dollar General and located Charles Robert Crump Jr., Age 37, of 131 Edgewood Circle, Star, North Carolina, hiding in the ceiling of the business. The investigation determined that Crump was in the ceiling for approximately four hours.

Charles Robert Crump Jr. was charged with one count of felony Breaking and Entering and one count of misdemeanor Injury to Real Property. Crump was placed in the Moore County Detention Center under a $25,000 secured bond and given a June 27, 2017 District Court date.