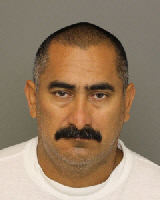 Sheriff Neil Godfrey announced the arrest of Seberiano Marquez Ramirez from Laurinburg for Trafficking in Cocaine during a drug investigation in the Aberdeen area of Moore County.

On June 26, 2017 deputies and officers with the Aberdeen Police Department stopped a 2014 Chevrolet Silverado truck in the Town and County Shopping Center parking lot in Aberdeen. During the search of the truck, deputies seized 2.2 pounds of cocaine and $860.00 in U.S. currency.

The total street value of the seized drugs is approximately $40,000.00.

Ramirez was placed in the Moore County Detention Center and given a $500,000 secured bond.