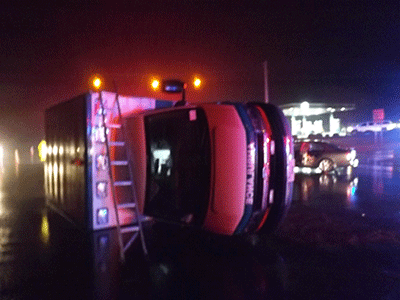 Emergency responders were dispatched at 7:52 pm to the intersection of NC Highway 211 and Juniper Lake Road west of Pinehurst for an accident involving an overturned ambulance.

Firefighters and law enforcement arrived to find an Infinity passenger car sitting in the middle of the highway with heavy frontend damage and a FirstHealth ambulance that was sitting on its side.

According to officials two staff members from the overturned ambulance were transported by Moore County EMS to FirstHealth Moore Regional Hospital. There was not a patient onboard the ambulance at the time of the accident, and the driver of the passenger car did not want to be transported to the hospital.

Both lanes of traffic driving west on NC Highway 211 was being routed through the parking lot of a local convenience store to get around the accident. Eastbound traffic was narrowed to one lane of travel while the injured were assisted and the debris removed from the roadway.

The cause of the accident remained under investigation by the NC State Highway Patrol as of this report.