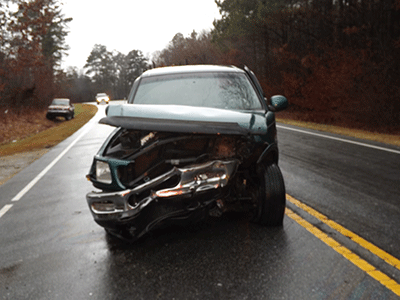 The head-on collision between a Ford F-150 pickup truck and a Jeep Grand Cherokee SUV blocked 24/27 and injured the four occupants of the pickup which included two adults and two children.

The driver of the Jeep Grand Cherokee was not injured.

According to several witnesses to the accident, the Ford F-150 had pulled out of a private drive onto NC 24/27 in front of the Jeep Grand Cherokee which was reported to possibly be driving too fast for the wet rainy conditions.

NC Highway 24/27 was initially totally blocked for an extended time period before one lane of traffic eventually reopening to allow the eastbound and westbound traffic to alternate past the scene.

Responding to the incident were units with Robbins Fire & Rescue, Moore County EMS, Moore County Sheriff’s Department, and the NC State Highway Patrol. GDS Towing responded to remove the vehicles from the scene.

This is one of 15 vehicle accidents since midnight on Moore County roadways at the time of this report (4:00 pm). Resdients are urged to please drive with caution and slow down for the rainy conditions.