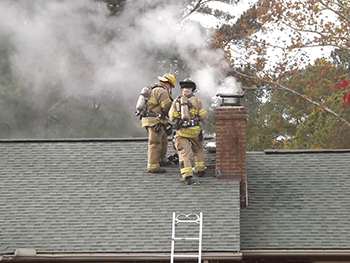 Emergency responders were called out to a possible structure fire Thursday afternoon in Whispering Pines.

Firefighters responded to a home in the 600 block of Michael Road off of NC Highway 22 just before 3:00 pm to find heavy smoke coming from around the chimney area of the single story house.

According to fire officials a fire started in the chimney for a wood burning stove causing the extra smoke to come out of the top of the chimney as well as into the house.

The fire was quickly brought under control shortly after firefighters arrived. According to fire officials at the scene the fire was contained to the chimney without any extension of the fire into the structure itself.

Firefighters remained on the scene for approximately 40 minutes checking the home and assisting the residents there.

Michael Road was closed to traffic in both directions for a little over half of an hour while firefighters worked at the scene.