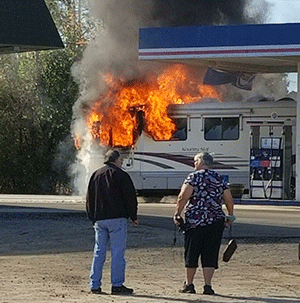 Local firefighters were called to an RV on fire Sunday morning at the Mac’s Food Store located at the corner of Sandpit Road and Roseland Road.

The Recreational Vehicle had caught on fire at the gas pumps of the store with flames quickly engulfing the front of the large vehicle.

A fast thinking Mac’s Store employee ran to the emergency shut off button for the fuel pumps when the fire started preventing this incident from involving the pumps and becoming much worse.

Firefighters were able to bring the fire under control, however the canopy covering the gas pumps at the station reportedly received minor damage in the fire according to company officials.

The Mac’s Food Store at this location was closed temporarily by the fire reopening shortly before 2:30 pm.