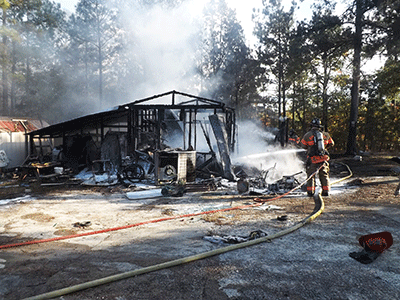 A storage building and its contents were destroyed behind a home on Juniper Lake Road a short distance off of Murdocksville Road Thursday afternoon.

Emergency responders were dispatched just after 2:30 pm to a possible structure fire in the area of 1185 Juniper Lake Road.

Firefighters quickly reached the scene and brought the blaze under control, however the building and its contents appeared to be a total loss.

One lane of Juniper Lake Road was closed for emergency vehicles to access the fire scene causing brief delays for drivers passing through the area at the time of the fire.

As of this report firefighters remain at the scene and a cause for the fire had not yet been determined.