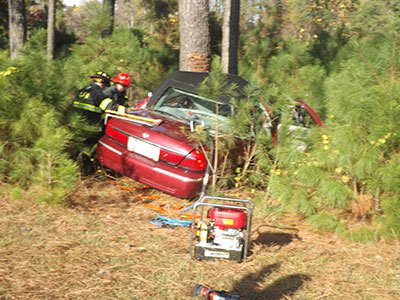 A Whispering Pines man died in a single vehicle accident outside of Carthage Monday afternoon.

Emergency responders were dispatched at 2:19 pm to a single vehicle accident on Joel Road at the intersection of Star Ridge Road with reports of the driver possibly being entrapped in the vehicle.

The first arriving emergency units reported a Mercury Grand Marquis passenger car that had struck a tree with the victim deceased at the scene of the accident.

According to officials at the scene the victim had been driving on Star Ridge Road before running a stop sign going across a field and striking the large tree.

Firefighters were on the scene an extended time period extricating the victim from the heavily damaged vehicle.

The man was identified by law enforcement as 52 year old Ray Hampton Jr from a Whispering Pines address.

According to Highway Patrol officials preliminary investigations indicate that the victim may have suffered from a medical emergency which was believed to be a contributing factor to the vehicle accident this afternoon. As of this report the incident remains under investigation.