One Injured In Three Vehicle Accident In Carthage Tuesday 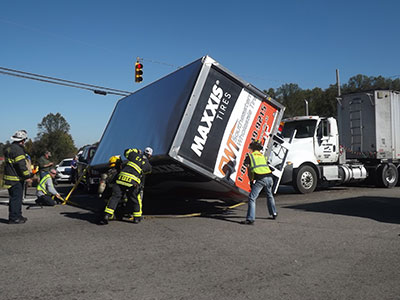 One person was injured and the roadway was blocked by a three vehicle accident in Carthage Tuesday morning involving a tractor trailer, a delivery truck and a passenger pickup.

Emergency responders were called out at 11:15 am to reports of a vehicle accident at the intersection of Monroe Street and Glendon-Carthage Road with reports that one of the vehicles was partially on its side.

Firefighters arrived to find a box style delivery truck that had been struck by a tractor trailer with the box truck partially overturned. According to firefighters at the scene the third vehicle involved, an F-150 pickup was the only thing that stopped the vehicle from flipping all of the way over.

The driver of the box style delivery truck was transported from the scene by ambulance to FirstHealth Moore Regional Hospital in Pinehurst with injuries reported as not life threatening.

The other drivers involved in the accident were uninjured.

The intersection of Monroe Street and Glendon-Carthage Road remained closed for an extended time period while the injured man was assisted and the wrecked vehicles removed from the roadway.

The cause of the accident remained under investigation as of this report.