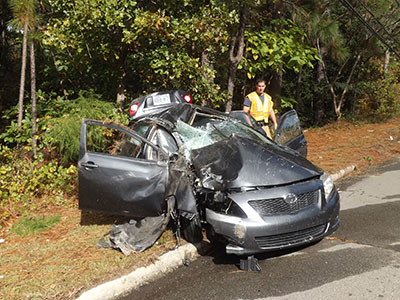 Two people were injured and both southbound lanes of the highway were blocked in Pinebluff Tuesday morning after a passenger car ran off of the road striking a power pole and rolling over multiple times.

Emergency responders were called out at 10:13 am to a reported single vehicle accident on US Highway 1 near the area of Boston Avenue.

The first arriving units reported heavy damage to the Toyota Corolla and a power pole that had been cut in half.

Two adults were transported from the scene by ambulance to FirstHealth Moore Regional Hospital in Pinehurst with injuries reported as not life threatening.

Both southbound lanes of US Highway 1 remained blocked by this accident for an extended time period, however officials used the center turning lane to keep traffic flowing causing minimal delays for drivers passing through at the time of the accident.