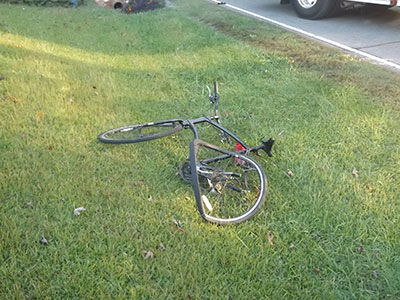 The bicyclist who was struck by a car on Tuesday near the Robbins Crossroads died after being airlifted to UNC Chapel Hill according to officials with the NC State Highway Patrol.

Emergency responders were dispatched at 5:10 pm to an accident involving a passenger vehicle and a bicycle in the 7200 block of NC Highway 705 a short distance from NC Highway 24/27.

The victim was transported from the scene by ambulance to the parking lot of a nearby business to meet a helicopter from UNC Air Care to be flown to a Trauma Center at UNC Chapel Hill where he later died.

The man was identified by authorities as Ronald Edward Hussey, age 65, from an address in the 6900 block of NC 705.

According to the accident report from this incident the 68 year old driver of the vehicle that struck the bicycle stated that the sun was in her eyes as she was driving and that she did not see the man on the bicycle.

NC Highway Patrol First Sergeant Ellington stated that the driver of the 2006  Chrysler PT Cruiser, Brenda Brown Saunders from an address in the 7800 block of NC Highway 705, is charged with misdemeanor death by motor vehicle.