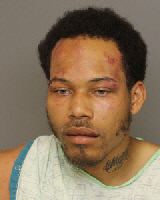 A 27 year old man faces numerous charges after a robbery attempt that occurred of a business owner returning to his home on South Street just before 11:00 pm  in Aberdeen Saturday night.

The perpetrator reportedly attempted to rob the owner of the House Of Fish Seafood Restaurant located on NC Highway 211 in Aberdeen while the man was returning home to the Oak Tree Village Apartments on South Street one block away from the local business. The man struck the victim over the head during the robbery before trying to flee from the scene.

Watts was first transported to the emergency room at FirstHealth Moore Regional Hospital for evaluation and treatment of injuries received from fighting with the victim and resisting the bystander that stopped him from fleeing. After being discharged from the emergency room he taken to the Moore County Detention Center in Carthage and held under a $260,000.00 secured bond

The robbery victim was transported to FirstHealth Moore Regional Hospital by ambulance for treatment of injuries reported as not life threatening.