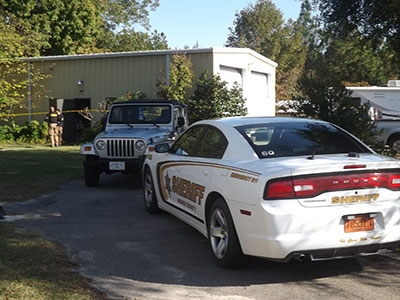 Emergency responders were dispatched to a possible gunshot injury at 12:09 pm Saturday in a building located behind a home in the 3700 block of NC Highway 73 outside of West End.

Located only minutes from the West End Fire Station paramedics and firefighters reached the location almost immediately after being dispatched. Shortly after arriving officials reported the victim was deceased.

Deputies secured the scene and called for detectives to be dispatched to the location along with the Medical Examiner. Officials remained at the home until after 5:00 pm processing the scene and collecting evidence.

According to officials the victim was a 50 year old female. She was found in a metal building behind the home by a male occupant who had reportedly gone into the building to retrieve an item left there.

The victim reportedly suffered a single fatal gunshot wound to the upper torso.

Moore County Sheriff’s Department Chief Deputy Frank Rodriguez stated that the shooting appears to possibly be intentionally or accidently self-inflicted, however detectives are investigating to ensure that there was  not any other party involved in the death.

The death remaines under investigation as of this report.