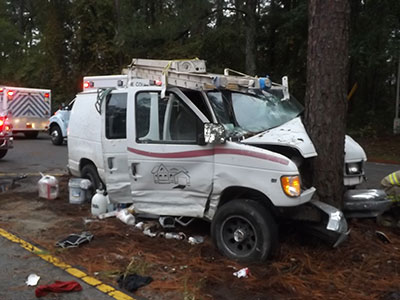 A two vehicle collision sent one of the vehicles head-on into a pine tree Wednesday morning in Southern Pines injuring four people.

Emergency responders were dispatched to a two vehicle accident on Midland Road at the intersection of Central Drive/Highway 22 just before 9:00 am.

A Ford Econoline work van with four people inside ran into the tree in the center of the median after a collision with a Honda Odyssey occupied by a woman and infant.

The three men and one woman in the work van were reportedly not restrained and suffered serious injuries in this accident. The scene commander requested two helicopters be dispatched for this accident however due to weather conditions at the time there were no aircraft available.

The woman and child in the Honda Odyssey were not injured in the accident.

This collision caused delays for drivers traveling in both directions on Midland Road as well as drivers coming onto or off of Central Drive/Highway 22 for approximately one hour while the injured were assisted and the roadway cleared of debris.