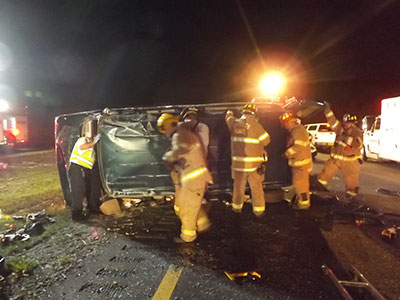 A Chevrolet passenger van from a church in Hoke County overturned in Vass Friday night injuring seven women and blocking both southbound lanes of US Highway 1.

Emergency responders were called out at 11:20 pm to a reported vehicle accident on US 1 Bypass near the NC 690 overpass.

The first arriving fire unit reported seven people injured with occupants entrapped in the vehicle which was lying on its side. A short time after reaching the scene Cypress Pointe Fire Chief Mike Cameron called for two helicopters to be dispatched for this incident.

Several of the occupants were able to get out of the vehicle on their own, however firefighters had to use several different rescue tools to stabilize the vehicle and cut the roof off of the van to free one trapped woman. 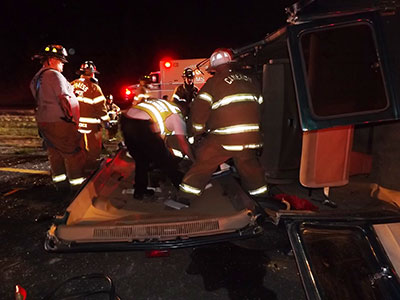 Two of the victims were transported from the scene by ambulance to meet helicopters that were landed at the ballpark in Vass to airlift the women to a Trauma Center in Chapel Hill.

Five other victims were transported by ambulance to FirstHealth Moore Regional Hospital in Pinehurst with reported non-life threatening injuries. 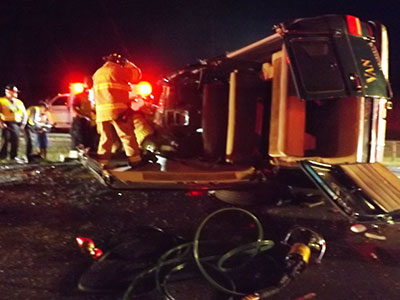 The Highway Patrol was still investigating the cause of the accident as of this report.