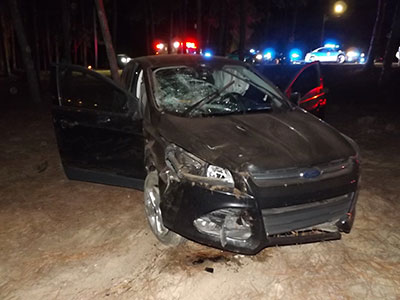 Several law enforcement agencies were called to assist when a single vehicle accident occurred in Whispering Pines Thursday night with reports that the driver had a weapon.

Emergency units were dispatched to a vehicle that had hit a tree on Airport Road at the intersection of Princess Gate Drive just after 9:30 pm.

As the first arriving law enforcement and fire units reached the wreck location the dispatcher advised all units that the driver was possibly armed.

According to officials at the scene when the first officer and firefighters arrived the 29 year old male victim held a knife to his throat and yelled for everyone to stay back before he turned and ran into the woods.

After a brief search law enforcement officers located the man in the woods approximately 200 yards from the roadway. He was handcuffed and placed onto a backboard before being carried out of the woods by a team of responders.

The man was yelling profanity as he was being loaded into the ambulance and appeared to be impaired, however reportedly only suffered minor injuries.

According to a witness at the scene the man was driving a Ford Explorer and had been stopped at the stop sign coming off of Princess Gate Drive when he gunned the engine and drove straight across Airport Road off of the road and into a pine tree before coming to a stop in the front yard of a home.

The man was transported by ambulance to FirstHealth Moore Regional Hospital in Pinehurst with non-life threatening injuries.

Airport Road remained closed to traffic in both directions for more than one hour while the man was located and the scene could be cleared.