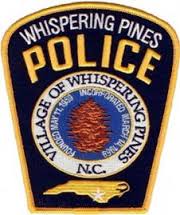 On September 13, 2017, the Whispering Pines Police Department received a report from Food Lion staff on Hwy 22 in Whispering Pines alleging an unidentified black female had fraudulently obtained a large sum of money in Western Union money orders. A suspect vehicle description was provided at the time of the report.

On October 4, 2017, Pringle and Shim returned to Food Lion where Shim attempted to obtain additional Western Union money orders. Senior Officer Christian McNeill with WPPD was off duty at the time and was inside the store during the incident and recognized Shim and the suspect vehicle from the previous incident. Both were apprehended on Hwy 22 while leaving the scene. It was discovered that Pringle had concealed a portion of his registration plate as to prevent someone from identifying his vehicle.

Pringle and Shim were taken before a magistrate and each given a $50,000 secured bond and a court date has been set for October 24, 2017 in Moore County District Court.