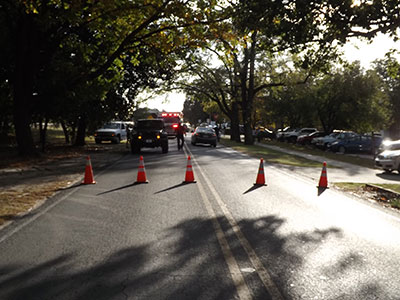 Emergency responders were called out to an accident involving a pedestrian and a vehicle at 5:07 pm on NW Broad Street near the intersection with W Vermont Avenue.

According to fire officials at the scene a young adult male victim ran into the side of a jeep before bouncing off of a Toyota Camry going in the opposite direction on NW Broad Street. The victim landed in the middle of the roadway after the accident.

A helicopter had originally been called for this incident; however it was cancelled after paramedics were able to conduct additional assessments of the man’s injuries. The victim was transported by ambulance to FirstHealth Moore Regional Hospital in Pinehurst.

NW Broad Street was blocked to traffic in both directions for approximately 45 minutes while the injured man was assisted and the accident scene could be cleared up. This accident happened as people were arriving into downtown for the Pinecrest Homecoming Parade causing delays and rerouting for people in the area of the accident.

As of this report the accident remained under investigation by the Southern Pines Police Department.