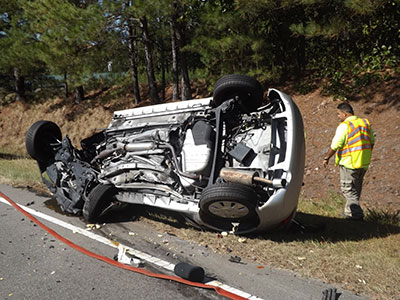 One person died and three others were injured in a two vehicle accident outside of Carthage Tuesday morning.

Emergency responders were dispatched to the accident on US Highway 15-501 near NC Highway 22 at 10:59 am.

The first arriving fire units reported heavy damage to two vehicles with one vehicle turned over on its side.

The accident was between a Scion and a Caprice. The Caprice belonged to the State of North Carolina and was assigned to the Prisons with the NC Department Of Public Safety.

The driver of the Scion, 51 year old Michael Sean Murphy from a Riviera Drive address in Pinehurst, was determined to be deceased at the scene of the accident.

The second Correctional Officer and the inmate were transported by ambulance to FirstHealth Moore Regional Hospital in Pinehurst with reported non-life threatening injuries.

US Highway 15-501 remained blocked to traffic in both directions for over an hour and a half while the injured were assisted and the accident investigated. The highway reopened to normal traffic shortly after 12:30 pm.

According to police officials the accident occurred after the Scion ran off of the side of the road and overcorrected striking the Caprice almost head on.

Whispering Pines Fire & Rescue, and Moore County Public Safety responded to Hillcrest Park on NC Highway 22 to establish a landing zone for the helicopter and assist in loading the victim.