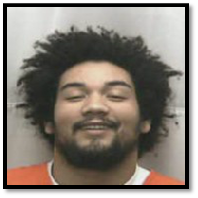 The Southern Pines Police Department announces an arrest for  a Criminal Homicide/Murder that occurred on Pennsylvania Avenue.

On September 29, 2017, at 11:40 am, the Southern Pines Police Department responded to the M&S Market, located at 912 W. Pennsylvania Avenue for a report of a shooting incident. Responding officers located a 19 year old male, later identified as Shyheem Ucif Utley, of Pinebluff, NC in the rear parking lot. Shyheem Ucif Utley had sustained a gunshot wound injury, and later succumbed to his injuries.

On October 2, 2017, members of the Southern Pines Police Department’s Investigations Division arrested Timothy Caldell Stanback, 25 years of age, from Stafford, Virginia, charging him with First Degree Murder. Timothy Caldell Stanback appeared before a Richmond County Magistrate and currently is incarcerated in the Richmond County (North Carolina) Jail with no bond, pending a hearing in a Moore County Court on October 24, 2017.

This investigation is still active and ongoing. The investigation to date has revealed that this was not a random act of violence, and that a nexus existed between the suspect and victim. Due to continuous nature of this investigation, additional details are not being released at this time.