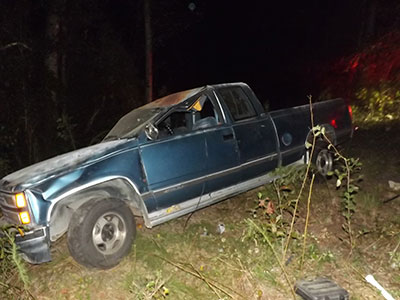 One person was injured when a Chevrolet pickup ran off of the road rolling over and coming to a stop back upright on its tires Friday.

Emergency responders were dispatched to the 600 block of Long Point Road outside of Vass at 1:14 am to reports of a vehicle overturned.

The pickup had run off of the road in a curve before rolling over and coming to a stop in the edge of the woods.

The driver had left the location of the accident before emergency responders arrived on the scene and was at a house a short distance from the wreck. The adult male was transported by ambulance to FirstHealth Moore Regional Hospital with reported non-life threatening injuries.

Responding to the accident were units with Cypress Pointe Fire & Rescue, Moore County EMS, and the NC State Highway Patrol.