1 Airlifted 4 Others Injured In US Hwy 1 Collision Wednesday 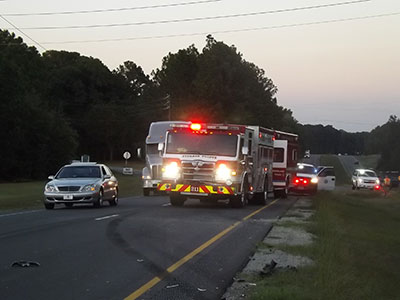 Emergency responders were called to a two vehicle collision with reports of one person possibly being ejected from the vehicle on US Highway 1 near Skyline Estates Drive between Vass and Southern Pines just before 6:45 pm.

The accident involved a Dodge Ram 1500 pickup truck and a Ford Expedition SUV.

One person from the Ford Expedition with reported serious injuries was transported from the scene by ambulance to the ballfield in Vass to meet a helicopter from UNC Chapel Hill to be airlifted to a Trauma Center.

Four other people were transported by ambulance to FirstHealth Moore Regional Hospital in Pinehurst with injuries reported as not life threatening.

Both southbound lanes of US Highway 1 were totally closed to traffic for more than 45 minutes while the injured were assisted and the Dodge Ram could be gotten out of the roadway allowing one lane to reopen.

One lane of the northbound direction was also closed during this incident to allow for the ambulances and fire trucks to access the scene.

Witnesses we spoke with at the scene gave different accounts of what may have happened prior to the accident occurring. According to Trooper JE McDonald with the NC State Highway Patrol the cause of the accident remained under investigation.

This was the fifth person airlifted from a vehicle accident here in Moore County over the last two days.