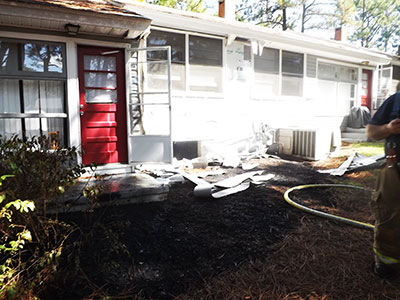 A carelessly discarded cigarette is being blamed for a midafternoon fire in Southern Pines Wednesday.

Emergency responders were dispatched to a possible structure fire in the 200 block of Crestview Road just after 2:00 pm.

The first arriving units reported an outside fire that had started the back of two single story apartments on fire and was endangering a natural gas meter.

Firefighters were quickly able to bring the fire under control limiting the damage to the outside of the building. The two apartments did reportedly suffer minor smoke damage.

Fire officials stated that a cigarette discarded in the pine straw was believed to be the cause of todays fire. This is the third fire in Southern Pines this year caused by a discarded cigarette including the large apartment fire on September 11th.

Responding to this incident were units from Southern Pines Fire & Rescue. Mutual aid departments from Aberdeen, Pinehurst, and Vass were cancelled before arriving on the scene once the fire was under control.