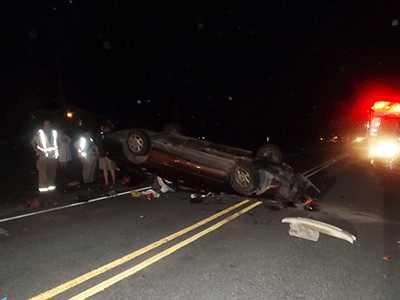 A Vass woman died in a single vehicle accident Saturday night outside of Cameron.

Emergency responders were dispatched just before 10:30 pm to a vehicle overturned in the 6100 block of South Plank Road with reports of the driver being ejected from the vehicle.

When the first emergency units arrived on the scene the woman was at the bottom of an embankment off of the roadway approximately 50 feet from the overturned vehicle. Shortly after reaching the accident location officials confirmed that the 34 year old woman was deceased at the scene.

The Nissan Maxima passenger car was overturned in the middle of South Plank Road blocking traffic in both directions causing the road to be closed for more than two hours while the fatal wreck was investigated.

The victim in the wreck was identified by officials as local resident Savannah Saunders, 34 years old, from a Vass address.

According to Troopers with the NC State Highway Patrol speed was one of the factors that contributed to the wreck which happened after the car ran off of the roadway in a sharp curve before overturning, however the accident remains under investigation as of this report.

Family members and friends of the victim in the fatal accident  are trying to raise money for a funeral via a GoFundMe page that has been established.