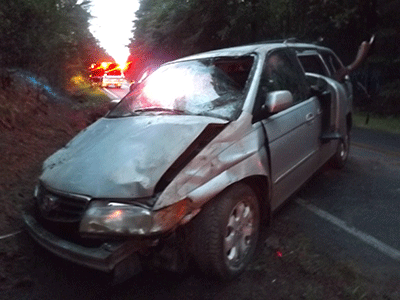 Emergency responders were dispatched to a vehicle that had overturned Saturday evening outside of Pinebluff.

The single vehicle accident happened on Roseland Road near Maxie Lane just after 8:00 pm when a Honda Odyssey minivan ran off of the road and struck a ditch before going airborne and completely turning over coming to a stop back upright on its wheels.

According to emergency officials the female driver of the Odyssey was able to get out of the vehicle before emergency responders reached the scene. The woman reportedly sustained minor injuries and refused transport to the hospital.

One lane of Roseland Road was closed for an extended time period while the accident was investigated and the debris removed from the roadway.