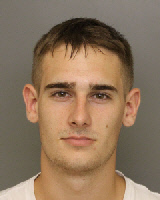 Benjamin Tyler Domenighini, age 20, from Portland Oregon was arrested by Aberdeen officers on charges pending from the US Military for Desertion.

Domenighini was transported to the Moore County Detention Center in Carthage where he was held with no bond.