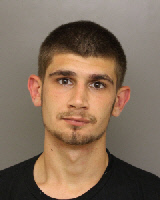 Police have made a second arrest in a robbery that resulted in the victim being airlifted after he was dragged on the pavement June 3rd in downtown Southern Pines. The incident occurred on NE Broad Street between Vermont Avenue and Connecticut Avenue near the Marathon Gas Station just after 12 noon.

The victim was transported from the scene by ambulance to the ballfield on Morganton Road to meet a helicopter to be airlifted to a trauma center for treatment.

Arrested today was Stephen Edward Bender, 23 years old, from an address listed as Meadowfield Circle in Aberdeen. He was held on charges of Common Law Robbery, Assault with a Deadly Weapon Inflicting Serious Injury, and Parole Violation.

Bender was transported to the Moore County Detention Center in Carthage where he was held without bond for the parole violation charge and a $100,000 secured bond on the common law robbery charge. His first scheduled appearance in court is on June 27, 2017.

In addition to Stephen Edward Bender a second person was also arrested for this incident. On June 6th Kristopher Dean Onorati, age 32, from a Glendon Carthage Road address was arrested and charged with conspiracy to commit robbery with a dangerous weapon and assault with a deadly weapon causing serious bodily injury.

Onorati was transported to the Moore County Detention Center in Carthage where he continues to be held under a $125,000 secured bond. His first scheduled appearance in court is on June 27, 2017.

To Read Article On Arrest Of First Suspecthttp://www.aberdeentimes.com/local/crime-reports/6799-one-of-two-suspects-wanted-by-southern-pines-arrested-tuesday-night