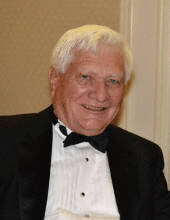 Robert Eugene Tweed, 82, of Pinehurst passed away Tuesday June 13, 2017 at his residence.

He was born on October 18, 1934 in Great Falls Montana to Charles and Beulah Tweed. He is preceeded in death by his parents.

Bob attended Bucknell University in Lewisburg, PA and graduated with a Bachelor’s Degree. He went on to pursue a career with General Electric and Abbott Laboratories eventually becoming a Vice President of the Hospital Products Division at Abbott Labs. After retirement, he moved to Pinehurst in 1996 with his wife Lorraine and went on to serve as a member of FirstHealth Moore Regional Hospital’s board of Trustees. Bob was president of the Golf Capital Chorus, an active member of Community Presbyterian Church where he served as an elder, and was treasurer of the Moore County Republican Men’s Club.

He is survived by his wife of 60 years, Lorraine; a son Dirk (Karen) of Columbus, OH; a daughter, Jody Gullifor (Mike) of Richmond, IL; five grandchilren Bryan, Brandon, Kellen, Kevin, and Matthew; and four great-grandchildren Cayden, Brody, Connor, and Ella.

A memorial service will be held on Monday June 19 at the Pinehurst Fair Barn at 11:00 AM with Pastor Rod Stone officiating. The family will receive friends at a reception following the service.

In lieu of flowers, memorial contributions may be made to the Northern Moore Family Resources Center at P.O. Box 190 Robbins, NC 27325 on behalf of the Hope Acadamy.

Online condolences may be left at: www.bolesfuneralhome.com

Boles Funeral Home and Crematory, Inc. will be assisting the family.