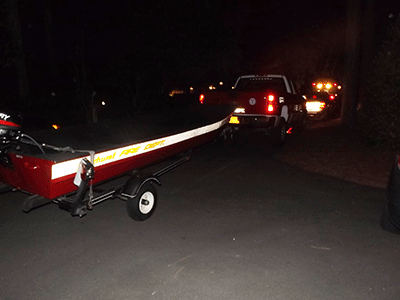 An 83 year old man was found floating in Lake Pinehurst Tuesday evening after being reported missing by his wife.

Law enforcement officers responded to a house on Lake Point Drive after the victims wife returned home and could not find her husband. After a brief search officers with the Pinehurst Police Department found the victim, 83 year old Robert Tweed of a Lake Point Drive address in Pinehurst, floating in the lake beside of a dock behind the man’s house.

Fire and EMS units responded to assist law enforcement including a boat from Pinehurst Fire Department. According to fire officials at the scene they were able to reach the victim without having to use the boat and pulled the man to shore.

Tweed was declared deceased at the scene and is scheduled to be transported to Raleigh for an autopsy according to the Medical Examiner.

Pinehurst Police Chief Earl Phipps who was at the scene stated that there were no signs of foul play, however officials are awaiting the conclusion of the investigation including the cause of death determination after an autopsy is conducted.